More Australians than ever are taking to the seas for a holiday, with Cruise Lines International Association (CLIA) Australasia revealing that in 2017 the Australian cruise market grew by 4.4 per cent, equating to almost 6 per cent of the Australian population taking a cruise last year. 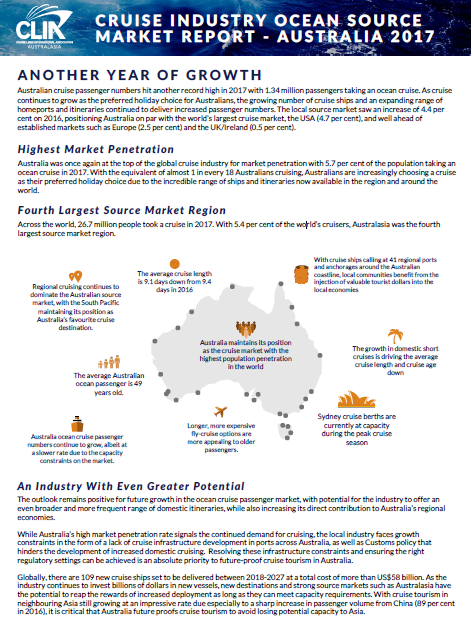 With more than 1.34 million Australians taking an ocean cruise in 2017, CLIA Australasia Managing Director Joel Katz said cruising had now become the quintessential modern Australian holiday. According to the industry body’s annual ocean passenger Cruise Industry Source Market Report, Australia remains the only market in the world to surpass a 4 per cent population penetration rate, well ahead of more mature markets.“As cruise continues to grow in popularity, more cruise lines will base more ships down under and the number of homeports and itineraries will only grow. With the equivalent of almost 1 in every 18 Australians cruising last year, Australians are overwhelmingly choosing a cruise as their holiday of choice and they’re coming back time and time again”.